A brief treatise to the Watcher’s Council by Nigel William Posvar III
April 23, 1999 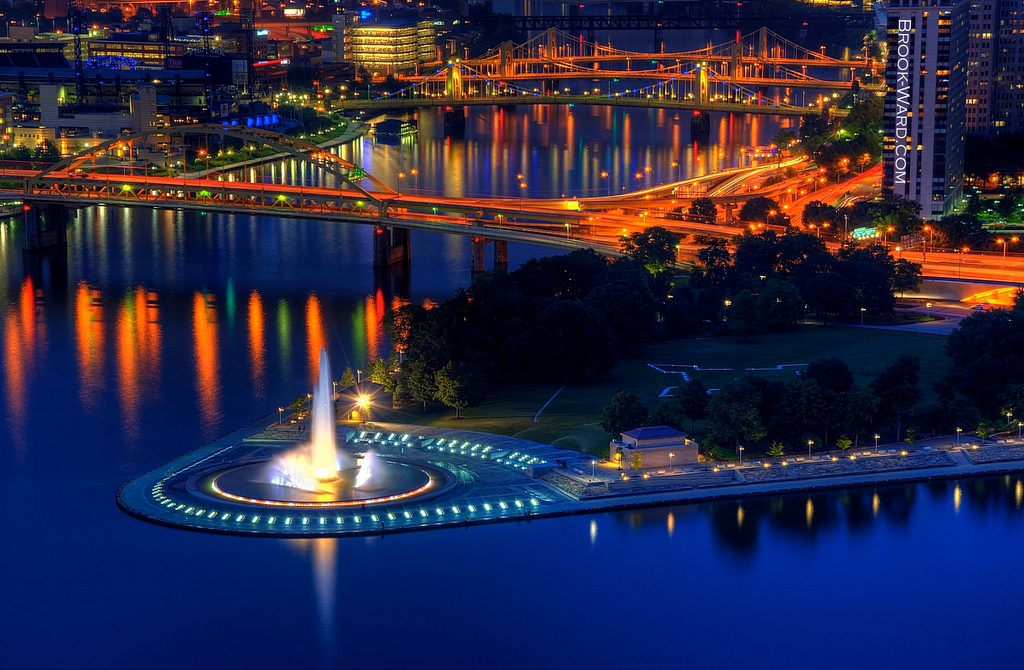 Each of the four rivers in Pittsburgh (the Monongahela, the Allegheny, the Ohio, and the underground “river”—actually an aquifier that feeds the fountain at Point State Park) has a dragon line (a line of magickal energy) following its course, which means practically the entire city sits on one of these trails. Mystic energy and psychic phenomena are in abundance as a result, and there are whispers, rumors, and accounts of creatures more terrifying than even the most evil vampire.

Needless to say, such an abundance of mystic energy is a veritable treasure trove for both the vampires and those opposing them. Worse, the four rivers meet at Point State Park, which means a center of mystical convergence of incredible power. This center of mystical convergence is the barely-sealed opening to countless hell dimensions, and some form of evil is always looking to blast the cork out of the bottle and let all the genies escape. I feel as though I should say more about the Hellmouth itself, but really, what can one say about a Hellmouth? It is, after all, much like other Hellmouths in the world. Instead, I shall endeavour to paint the history of the place where the Hellmouth is located.

History of the Point

The Hellmouth, as I have said, is at the point where the four rivers merge. This point (called Point State Park) is a public park, as well as a historical landmark, and it has seen its share of war and bloodshed over the centuries. The park is built on the site of Fort William Pitt, a literal fort dating all the way back to the French and Indian War. In the mid-1700’s the Ohio River was a waterway of great strategic importance, connecting present-day French Canada with the Eastern part of what is now North America.

Trade vessels between French colonies in the north and settlements in the south constantly traveled back and forth along the Ohio, Allegheny, and Monongahela rivers, and the French needed a stable military port along this route. At the time there existed a small British encampment named Fort Prince George at the juncture of the rivers, right where the French needed an outpost. In 1754, an army of French and Native Americans overwhelmed Fort Prince George, which was in fact still under construction, and drove the British out. The tiny fort was burned almost to the ground in the battle, and the construction of the massive Fort Duquesne began. Through numerous bloody battles and attempts to reclaim the fort for the British, Duquesne held out for four more years.

In 1758, General John Forbes led an army of 6,000 troops to finally drive the French out of Duquesne once and for all. This time, the majority of the fort stood intact, and the location was re-named Pittsborough, after the Prime minister of England, William Pitt. The fort became one of the largest English strongholds in North America, and was never again besieged by French forces, though Native Americans did repeatedly lay siege to the settlement until the Battle of Bushy Run, in 1763. The fort and the walled settlement within remained a garrison town until around 1790, when the city (now called “Pittsburgh”) finally began to develop in its own right.

The frontier had begun expanding, and Pittsburgh became a sort of gateway to the western part of the continent (and indeed was given the nickname “Gateway to the West”). As the French knew early on, the three rivers that the city is known for were a necessary and extensively used means of travel throughout the area, connecting the west with the east and the north with the south, and Pittsburgh saw its share of visitors, from George Washington to Daniel Boone to Jim Bowie.

Evidence shows that the Hellmouth at the point first leapt into active status sometime during the battle in which Duquesne was conquered for the British.

These days, due to the massive amounts of psychic energy in the area, ghostly images of battles long past can sometimes be seen at the point, and silent visions of soldiers walking translucent ramparts, firing weapons at ancient native warriors, fighting, bleeding, and dying, can be disconcerting at best. These images have been relegated to the local ghost story repertoire that all cities seem to possess.

The fort itself, of course, is long gone; however, visitors can (or could, at one point) walk the outline of the fort by means of a trench in the ground that traces the length of the original foundation. Also still in existence is Bouquet’s Blockhouse, the oldest building in Pittsburgh and the only remaining original piece of the fort. Three defensive earthworks from the fort have been recreated on their original sites, and one of these houses the Fort Pitt Museum, a treasure trove of historical information about the city.

Vampires stalk the Point late at night, and with the notable exception of holidays such as Independence Day, when the Americans celebrate their noteworthy uprising against the Empire, and various festivals throughout the spring and summer months, it is not advisable to enter the park after sunset.

As with anywhere, things in Pittsburgh get far more complicated than history and magickal energy. The undead plague this city as they do few other cities I have visited, studied, or even heard about. No one knows how or why this city is such a magnet and breeding ground for the undead, but if our figures are correct, there could very soon be enough of the monsters in existence here for a Master to make its presence known. Should this happen, I fear that the city will truly feel the opening of the gates of Hell. With a Master vampire taking up residence here, there may be little to nothing of the city left.

It seems as of late more and more vampires have been flocking to the city, and many neighborhoods have become almost rabid feeding grounds for the fiends. Rumors circulate that somehow the mayor of the city has fallen under the thrall of a Master Vampire or demonic force of some sort. If this is true, it is an unprecedented and frightening turn of events, for our intelligence points to the possibility of an apocalyptic battle on the horizon. However, if it has happened, this Master has not shown his or her face. I cannot speculate upon the truth of this rumor, except to say that in rumor there usually lies at least some small grain of truth, some spark that set the rumor mill in motion. Do we have a Master Vampire in control of Pittsburgh? I can’t say for certain, but if the shadows at work in the city are any indication, I would say that it is possible. If we do, then may all the gods of light help us, for our troubles have increased tenfold.

Magic and Cults in Pittsburgh

There are indeed a number of powerful cults operating in Pittsburgh. Indeed, there are literally dozens of covens and cabals located in warehouses, abandoned buildings, and wooded areas throughout and surrounding the city. Some of the covens and cabals are registered as practicing witches and wizards; most are not. I suspect that some wield significant temporal power, operating “behind the scenes” of politicians and power brokers. I have as yet been unable to scratch the surface of these groups, save turning up a few names: Rosicrucian, Cabal of Psyche, Twilight Order and Sentinels are a few. When I have tried to dig deeper, references vanish like a wisp of smoke on the wind, if you will indulge the turn of phrase. Still, the Watchers Council maintains a subtle presence in Pittsburgh and certainly keeps an eye on those cabals it becomes aware of who are not registered.

Updates to Prior Treatise

Additional information has been added to the Council’s knowledge base as of July, 2007 and October 2012 by Anita Blake, Watcher Emeritus. It concerns the nature of the power groups operating in Pittsburgh, an event known as the “Covenant War,” the closing of the Pittsburgh Hellmouth, and its eventual re-opening with the arrival of “Club Apocalypse.”